Due to the current situation with Coronavirus and the advice from the UK Government we have had to close our Heritage Centre for the time being and postpone our forthcoming Family History Open Day and monthly speaker events.


We Apologise For Any Inconvenience

Trading goods can still be ordered and research enquiries made and we will resume all our activities as soon as possible.

As far as I can recall, there was a national request to build bonfires on local landmarks to mark the 50th Anniversary of VE Day on 8th May 1995 - just as there had been for centuries before whenever there was the threat of invasion. 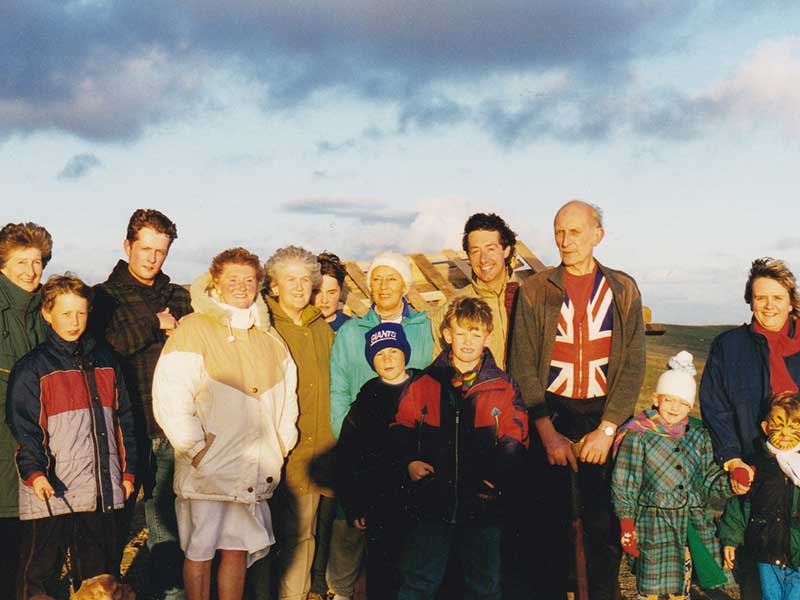 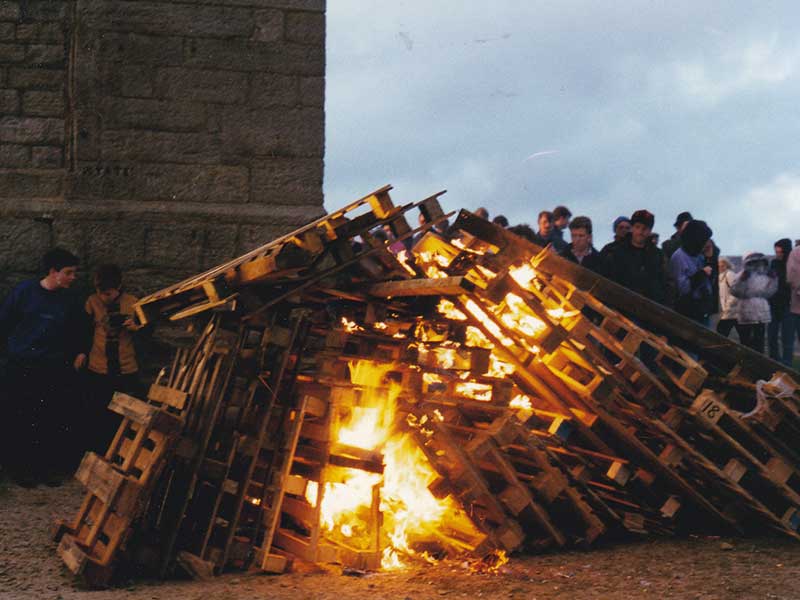 Rivington Pike was such a landmark, having been used on a number of occasions over the centuries for such a purpose including to warn of the Spanish Armada in 1588. I don't know whether we sought permission or just did it but it required putting out a call locally in Horwich for surplus wood supplies. These were then deposited at the end of Georges Lane below the Pike from where a few of the Horwich Heritage members including Norman Pendlebury and myself hauled it up to the top (you can see us both on the photo).

It was a windy evening (as always) but the weather was fine and the fire burned successfully as you can see on the other photo. Somehow I don't think you would get permission to do that today and we (now over 70s) probably wouldn't be able to do lug all that wood up there now!

A memorable occasion - not likely to be repeated! Happy Days - Stuart Whittle 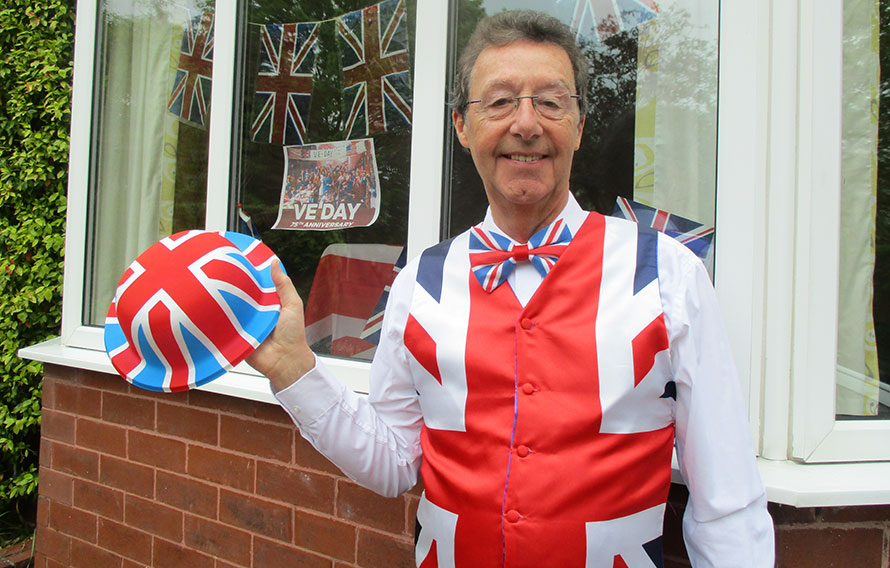 Despite the 'lockdown', I hope you are finding suitable ways to celebrate/commemorate VE Day - attached is my attempt! Here's to when "Well Meet Again" in the not-too-distant future. Best Wishes - Stuart

As I'm sure you are all aware, the 75th Anniversary of VE Day cannot be celebrated either nationally or locally in the ways that the Government had planned but that does not mean that this momentous event should not be recognised and commemorated. 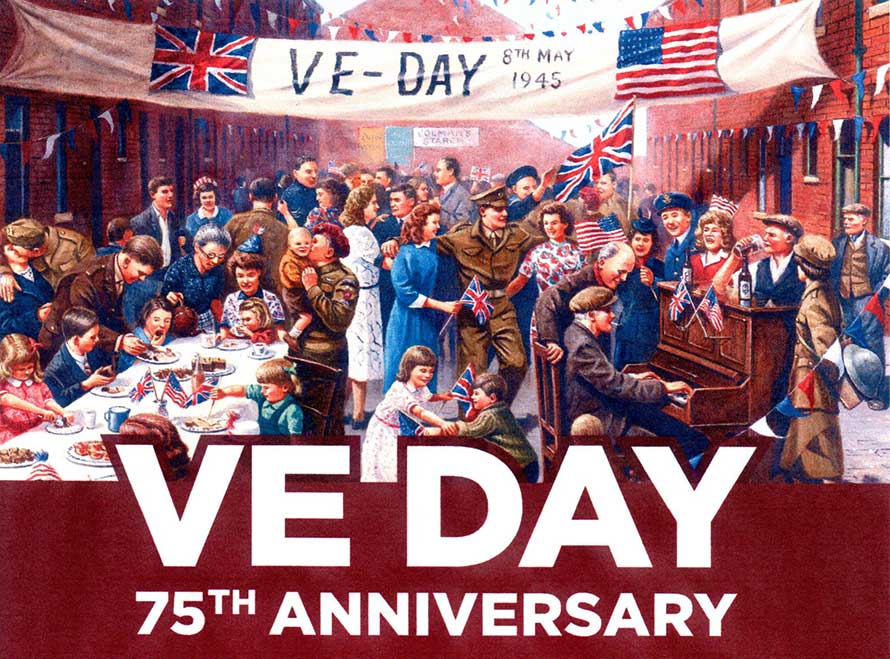 As I write, plans have been announced for 2 minutes silence at 11am on 8th May followed by Winston Churchill's famous "This is your Victory" speech at 3pm. The Queen will then address the nation at 9pm and this will be followed by a 'sing-along'of wartime favourites. 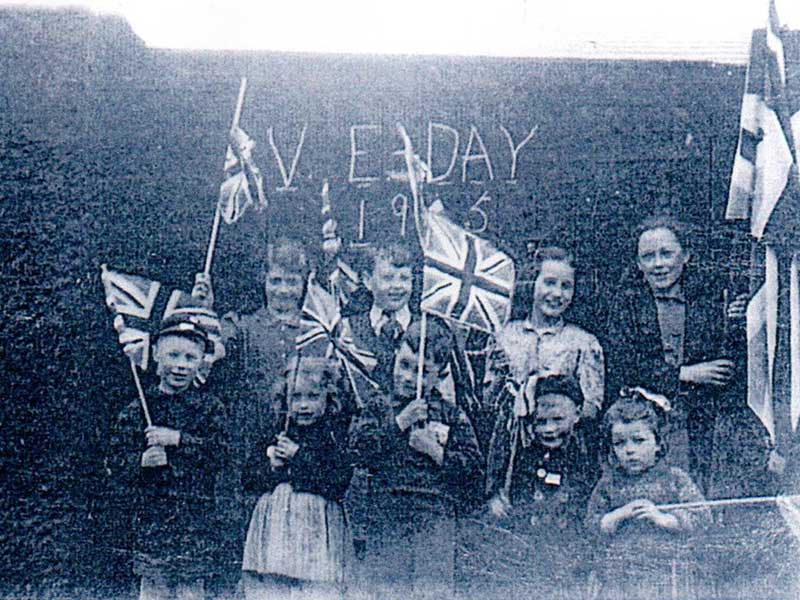 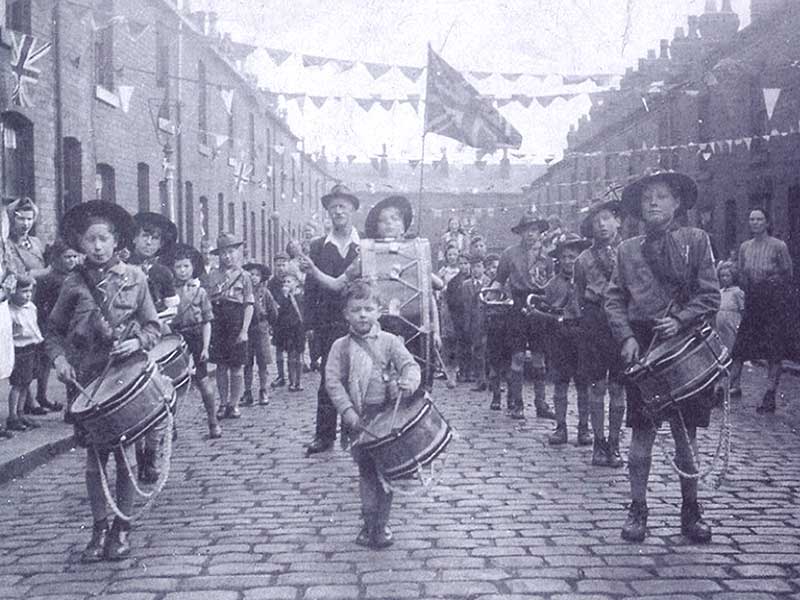 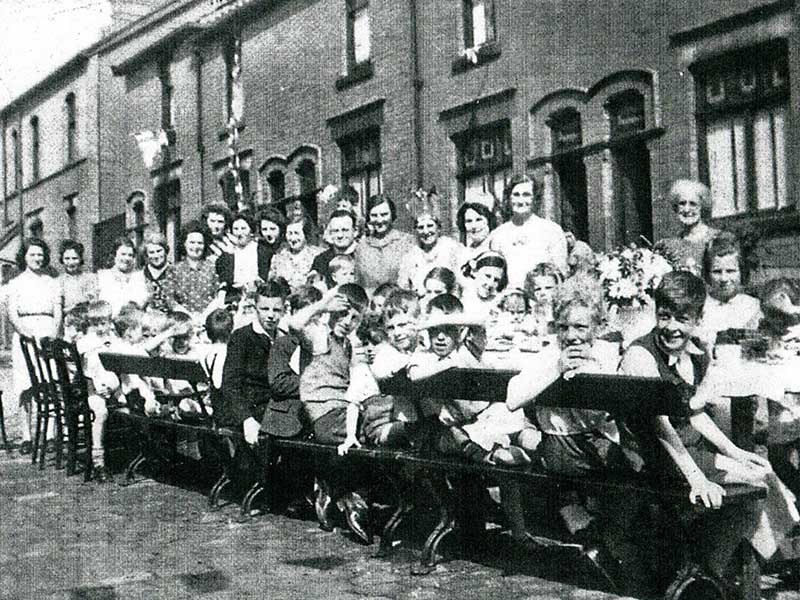 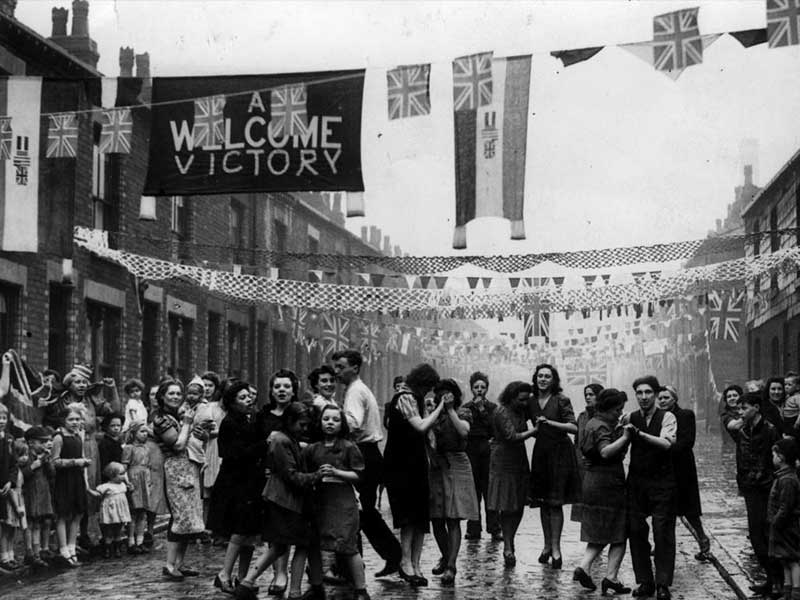 Thanks to the internet and YouTube, we can all read and watch Churchill's speech and witness the wild celebrations that took place outside Buckingham Palace on 8th May 1945 and, during the coming week, the main TV channels will be showing recently-discovered VE Day footage which will definitely be worth watching. This was a day of national rejoicing after almost 6 long years of war but also a day to reflect on the hardship and loss that had been endured. Across the country communities celebrated in their own ways and, thanks to the Horwich & Westhoughton Journal, we have a record of some of the activities that took place in Horwich. The paper reported that "The victory announcement was greeted in Horwich with rejoicing and thanksgiving. 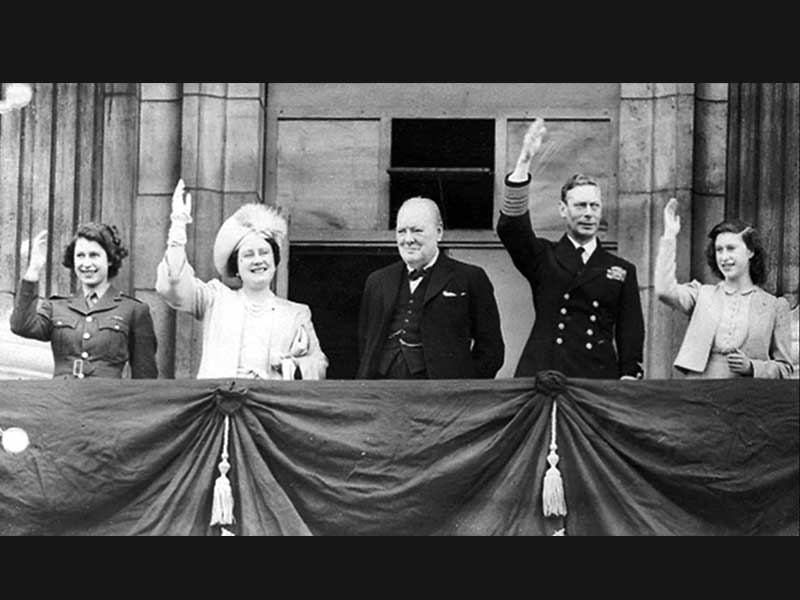 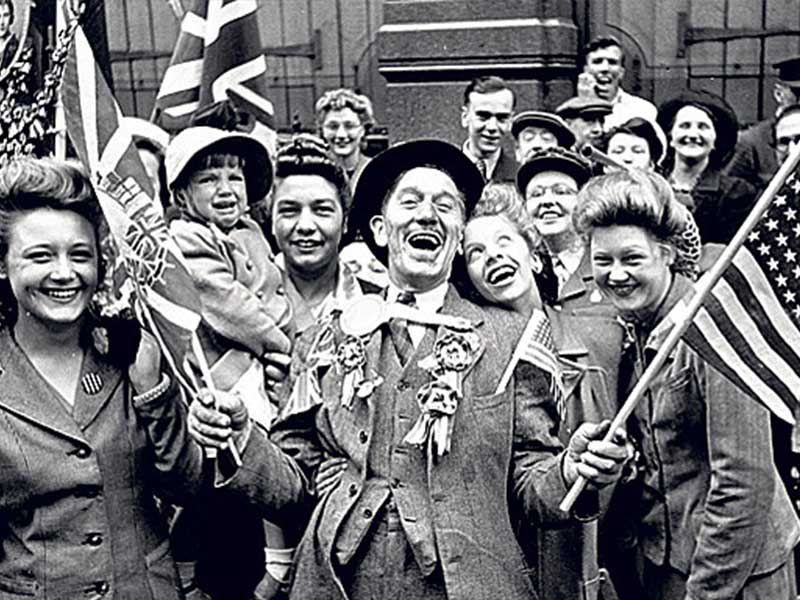 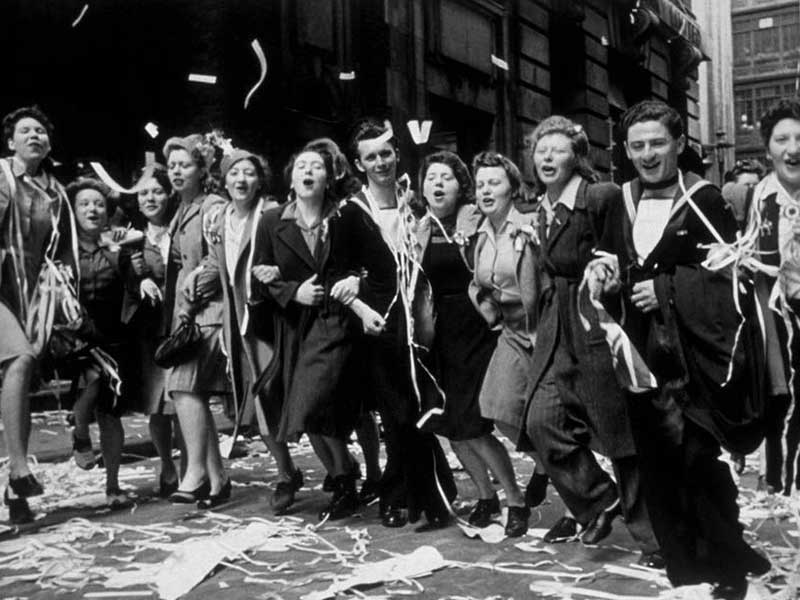 The Union Jack was hoisted on public buildings and works, mills and all the streets were gaily decorated with flags and bunting. The Public Hall was illuminated and, following the broadcast by the Prime Minister, Winston Churchill, the Parish Church bells rang merrily. The streets were thronged with people on holiday and in the afternoon and evening the celebration was enlivened by Horwich Old Band who paraded the main thoroughfares halting to play patriotic and other tunes outside the Public Hall, at the Crown Square, the Labour Club, British Legion Club and Loco Works cenotaph. Horwich Boy Scouts drum & bugle band (see photo) also paraded throughout the town. Children in various parts of the town enjoyed street tea-parties, lit bonfires, burned effigies of Hitler and exploded fireworks. 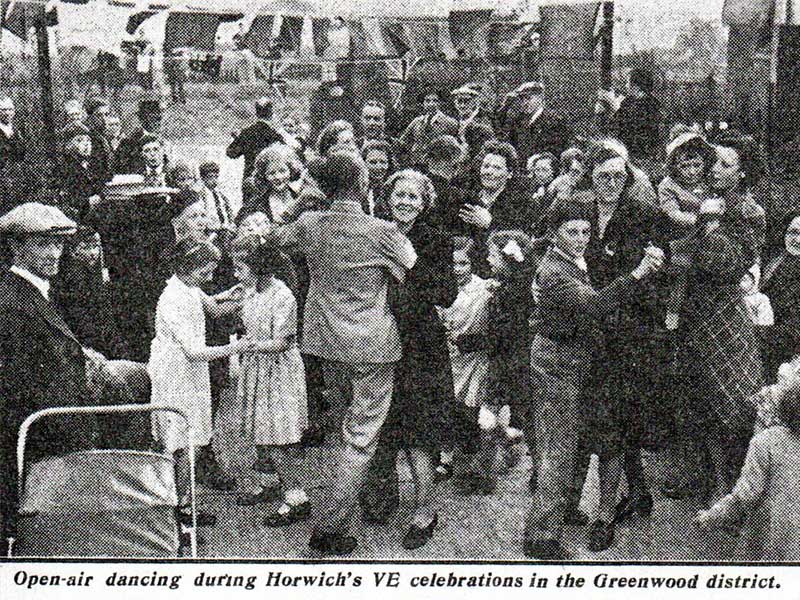 At midnight the noise of fireworks was heard again and crowds of young people linked hands and sang and tripped merrily through the streets on their way home." Services of thanksgiving were held on the evening of VE Day at Horwich Parish Church and St Catherine's and there was a Civic Service attendee by the chairman & members of Horwich Council and members of the various organisations who had contributed to the war effort on Sunday 13th May.

With all this going on, it is disappointing to read the generally low key coverage of these events in the H&WJ of 11th May 1945 (see front page headline & article attached) with only one photo of the town's celebration's, near the Greenwood, included (copy attached). Maybe this was reflection of austerity (few reporters or photographers available?) or a combination of relief/exhaustion that it was all over. The attached page from that edition perhaps sums up the mixed emotions of the time with the wedding photo of George Smart and Joan Tomlinson at St Catherine's Church sitting alongside the summary of the Victory celebrations and the report of the death of Staff Sgt. John Ellison of Lee Lane killed in the airborne landings near the Rhine. The paper did find the space to (quite rightly) thank all the people who had organised the town's war effort but then quickly moved on the talk about other issues of the day like the burgeoning cost of running Fall Birch Hospital. This has left us with little visual coverage of the 1945 VE Day celebrations other than the 3 photos from our archives of the Scout Band in Winter Street and the St Anne's Road Street Party and children dressed up in Chapel Street. It would be great if more photos and stories could be unearthed by our members and the people of Horwich. 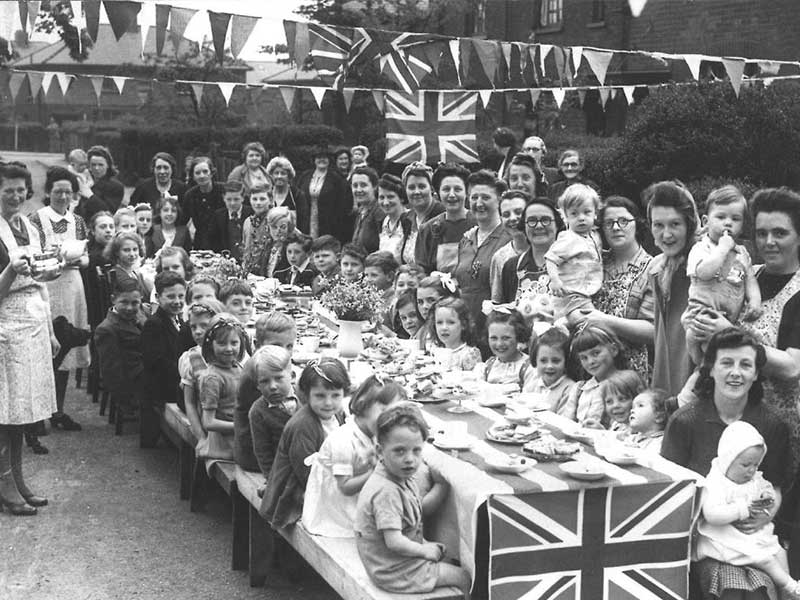 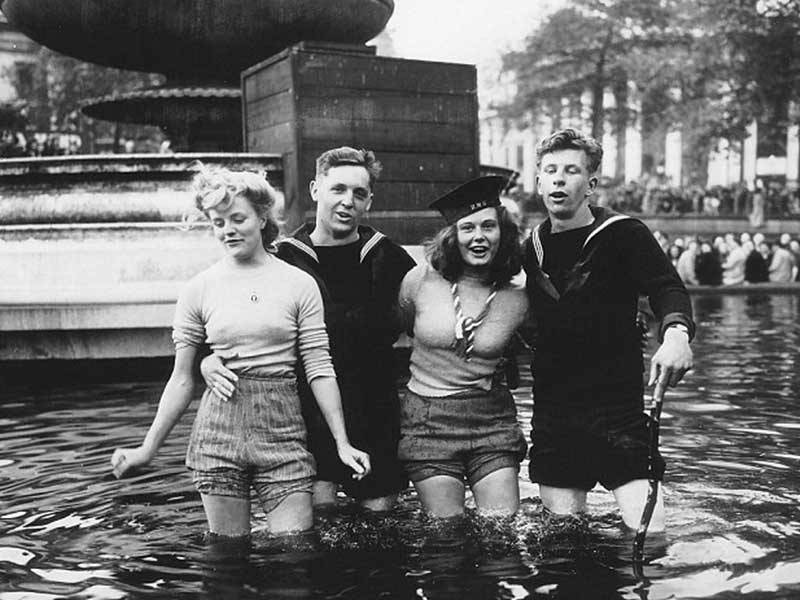 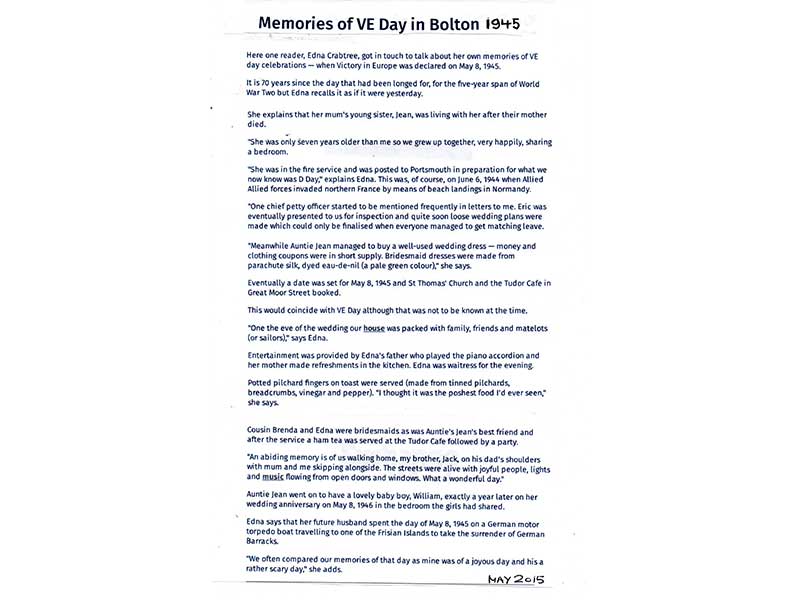 In the absence of a fuller celebration/ commemoration of VE Day over the weekend of 8th-10th May 2020, I hope this short article and attachments paints a picture for you of Horwich 75 years ago - a town suddenly realising that the long years of privation and loss were at an end and that the long road to recovery could begin. Perhaps we can take heart from their fortitude as we face our current crisis. Although the war with Germany was over, the war in the Far East still raged on until the Japanese surrendered in August. The current Government intention is to hold a combined celebration/ commemoration of VE & VJ Day on 15th August. Let's hope there is 'some light at the end of the tunnel by then'. 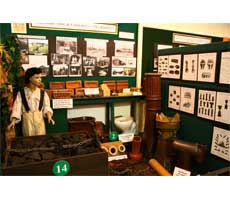 Horwich Heritage was formed in 1985 following a series of public meetings aimed at re-establishing a sense of local pride in the wake of the closure of Horwich Locomotive Works the previous year.

Membership currently numbers around 200 and the Society not only runs its own Heritage Centre and meetings but produces its own books and DVDs on subjects of local interest. 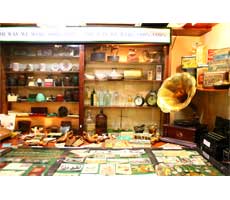 The groups aims are:

On this website you will find details of how to become a member Horwich Heritage, dates of forthcoming meetings and events, a list of publications available frm the society and information about the exhibitions and archives at the Heritage Centre.

As the Society approaches its 34th year, we look forward to further developing our activites based on our much-admired Heritage Centre where we have the opportunity to do justice to the rich and varied history of Horwich and all the people who have helped to make us so proud of the town today.

We hope you find that Horwich Heritage has something to offer and welcome your interest, suggestions and support.

Our 2020 programme has now been finalised, featuring our popular Open Days, Monthly Meetings and Joining Information.

You can download your own PDF copy by clicking here: Horwich Heritage - Events Programme 2020

All Open Days Are
ADMISSION FREE

May 12th 2020
Village Life In The Middle Ages - Stuart Elliott

Membership: £10 per annum
Non-Members: £2 per meeeting

This year's programme is turning out to be another good one and the leaflet with the list of speakers & Open Days for 2020 is now available from the Heritage Centre. Please renew your membership now. If you are not a member why not join? Only £10 for 11 talks.

HORWICH HERITAGE CENTRE is open every weekday 2- 4pm & Saturdays 10 - 12.30pm. It has a shop, shows and sells films about Horwich and has a range of professional exhibitions and displays to delight all the family. Help is also available for family history and other research. ADMISSION IS FREE!